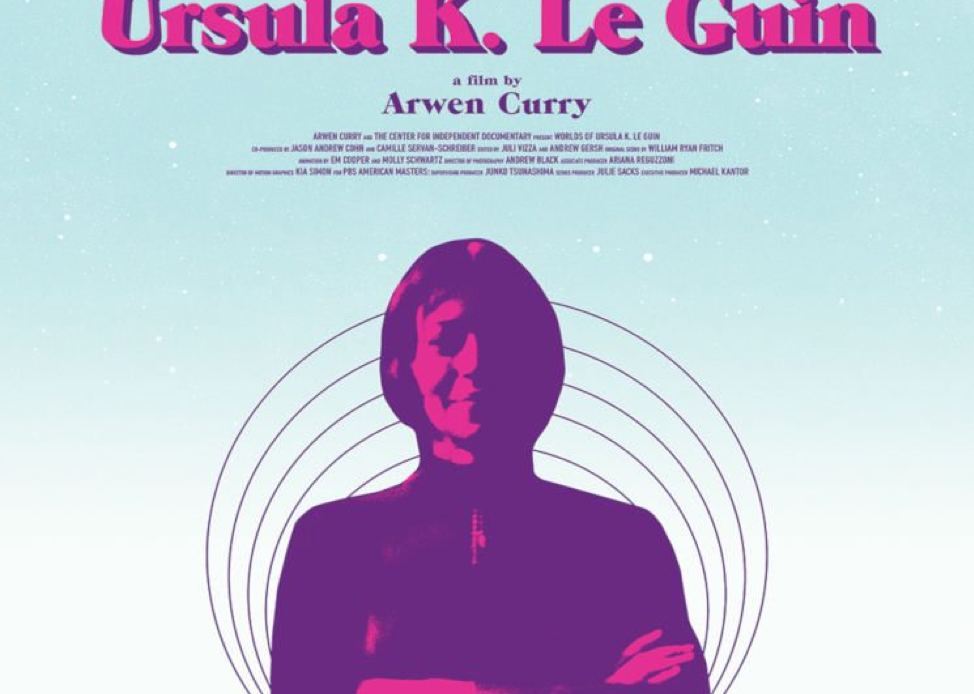 By Jiyong Kim, with the help of Kate Sheckler

Ursula K. Le Guin was a brilliant writer whose sentences string together to form something magical. The documentary, Worlds of Ursula K. Le Guin, presents Le Guin as a literary “wizard,” performing magic tricks that involve a pen, paper, and creativity. In the film, Le Guin agrees  that writing is like doing magic as she explains, “[…] I do magic. I do makeup things that didn’t exist before by naming them. I call it, ‘Earthsea’, and there it is.” Le Guin’s  sci-fi and fantasy novels have gotten so much love and recognition from readers and writers, they have won her awards such as the Hugo Award and Nebula Award which are the highest honor one can receive as a sci-fi writer.  Le Guin’s inventiveness and her love of writing are undeniably displayed in her books, but the history behind her success and creativity  is equally  interesting, as explains the documentary Worlds of Ursula K. Le Guin.

Le Guin’s sister-in-law, Jean T. Kroeber, describes Le Guin as a natural born writer; who is very intelligent and always passionate about, not only her writing, but also, the human rights issues that show up in that writing : “She couldn’t see herself as a science fiction writer. She wanted to write imaginatively about what interested her.”  Even  though her talent was notable to  those around her, at the beginning of her career as a writer, things didn’t work out so easily for her. Le Guin was  a writer at the time when writers were macho and masculine under the influence of Ernest Hemingway; consequently, because of her gender, Le Guin had trouble publishing. According to Annalee Newitz, an editor-at-large, as a writer under this trend of masculinity, Le Guin was influenced to write her science fiction novels from the perspective of heroic men, just as other science fiction writers were doing at the time. After publishing a few novels of the Hainish Cycle that got some attention, it was in 1968 when a publisher requested Le Guin write a young adult novel.

In Worlds of Ursula K. Le Guin, Le Guin says she made up imaginary islands and named them in order to start thinking about what would actually be happening on those islands. This led to a story of wizards and the magical power of words: The Earthsea series. In the film, Neil Gaiman, an important writer of science fiction, who is also well known for his comic The Sandman, tells the audience how big of a deal Earthsea was and is, making the enormous statement, “I don’t think Harry Potter could have existed without Earthsea having existed. That was the original, the finest, and the best.” After Le Guin’s first Earthsea book went well, she published sequels: The Tombs of Atuan, The Farthest Shore, Tehanu, and The Other Wind, all of which she talks about in the documentary.

Phillips, a biographer, describes Le Guin as a very hard working writer with  a very strong will, saying that she managed to work all the time while raising her children. Le Guin was also a feminist, and she did try to express the idea of feminism in her early works but was criticized for not being able to completely engage with the idea. In The Left Hand of Darkness, she asked herself about the fundamental difference between men and women, and she tried to find an answer to this by inventing a new race of people who are isolated from other societies and are consequently unaware of their difference (they become sexually active once a month as either a man or woman). Theodora Goss, an author interviewed in the film, says that “The Left Hand of Darkness” was a feminist novel but explains how some feminist fiction writers and critics felt Le Guin didn’t go “[…] quite far enough.” Le Guin herself said, when she first heard this response, that she felt defensive, but she soon accepted the critiques and studied feminism, reading other female writers’ books, which led her to adapt as a writer becoming an even better writer then before.

Many authors and editors from this documentary describe Le Guin as a great mind who explored important questions of our society.  About her  short story, “The Ones Who Walk Away from Omelas,” Le Guin said that she wanted the readers to consider the following thought: to where would humans walk away in order to escape from injustice? In The Dispossessed, she tried to go much deeper into this question by considering what a utopian society would look like. Le Guin said about the book, “This was a late 60’s. People were asking what might a perfect society look like. The society that was not based on oppression. Thinking about that question brought me to non-violent anarchism. I think anarchist thinking is one of those profoundly radical ways of thinking that is very fruitful, very generative.”  The documentary presents The Dispossessed as very intellectual and artfully written, and the world of 1975 agreed because The Dispossessed was the winner of both the Nebula and the Hugo in that year.

Le Guin’s contribution to science fiction is huge. She introduced new scientific and cultural aspects to the genre. She also started doing conferences and lots of public speaking related to SF, which helped in  creating a community of writers and readers of science fiction. As well, Le Guin wrote in many genres, and all her work has contributed to the literary world. Le Guin’s impressive reputation is made clear in Neil Gaiman’s statement, “I was there giving her [Le Guin] the medal for literature which was one of the hugest honors of my life.”

The documentary contains Ursula K. Le Guin’s thoughts about her life, her books and the many important things that she has done. Many authors have commented on how the world has reacted to Le Guin’s work as well as their own reactions to Le Guin’s footprint. The film also shows the audience the life of Ursula K. Le Guin as a regular person, which Le Guin’s fans may find pleasing. The opinions of other writers and Le Guin’s interviews made it possible for me to see how unique a writer and person Le Guin was. Whether or not the audience has read her work, they will be able to understand that her work has been and still is meaningful; they will be able to appreciate her work. For Le Guin fans, this documentary is absolutely something one can’t miss. For those who haven’t read Le Guin, this documentary will spark your interest. I believe this documentary has succeeded in its task of communicating Le Guin’s marvelous legacy.