“The Ones Who Walk Away from Omelas” : A Strange Journey 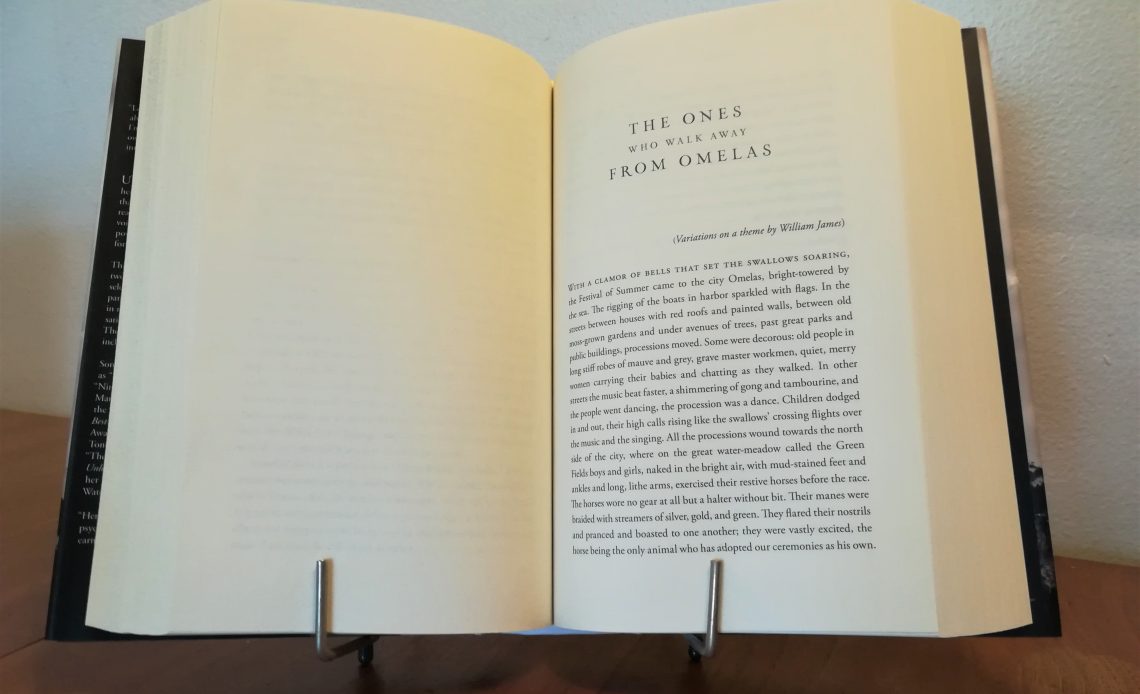 “The Ones Who Walk Away from Omelas” is a short story written by Ursula Kroeber Le Guin, and it is a special story worthy of attention due to its underlying complexity despite it being a very simple story on the surface. Personally, this tale is a very meaningful experience because it touches upon many important aspects of humanity. The story takes place in the City of Omelas, which is a very beautiful city right next to the sea, and it follows the citizens of Omelas who are preparing and celebrating the start of the Festival of Summer. The story is not character driven, but rather, it is filled with descriptions of the city and the narrator’s dialogue with the readers. At the beginning, the readers are invited by the narrator to imagine this city according to their ideals. This premise seems promising at the beginning because we are given the liberty to fulfill our desires, but the startling revelation about the child prisoner whose misery is the key to this city’s happiness and prosperity bursts our bubble of imagination. The citizens are simply background characters for most of the time, but this does not stop them from being very complicated people with conflicting motives and thoughts, just like the rest of us who have become a citizen of Omelas by participating in the construction of this city. As for the child, we know very little about him or her except for the fact that the whole city’s well-being depends on him/her alone.

There are several themes that this short story has chosen to explore, and one of them is exploitation within a society. In the story, the child is the exploited one even though we are told that he or she did nothing wrong to be placed in that position in the first place. Essentially, this division between the child and the citizens of Omelas is a form of class division. The “upper class” in the story, the citizens, seem to have adopted a worldview based on utilitarian principles by putting the well-being of a city, not the child, as the top priority. This situation is an interesting take on the class division because the “exploited” class normally constitutes the majority of people, the working class, in a capitalist society. In Omelas, there is only one child who must suffer to maintain the “egalitarian” society even though her/his condition is arguably worse than a typical middle-class citizen. But while class inequality is an important element in the story, it is actually also a set-up for exploring one’s ability to make choices through a comparison of the citizens who have left Omelas after learning the true origin of their happiness and those who stay in the city. The people who left are the ones who successfully protect their humanity by choosing the moral course of action unlike most citizens in Omelas who consciously try to rationalize their absolute control over the child. The text provides no hints as to the leavers’ destination, which implies that their journey is filled with uncertainty. Even though leaving the city might not guarantee any further changes, these citizens have done their parts by choosing not to comply with public opinion. This situation is similar to our modern capitalist societies in which we have to actively participate in order to live. But whether we exploit the lower-class people who are already controlled by the elites or not sometimes remains our decision to make. Le Guin herself has said that the power of capitalism seems inescapable, but so did the power of kings. Any human power can be resisted and changed by us. (Wahlquist, 2018)

Finally, the story also touches upon utopianism. The term “Utopia” was first used by Sir Thomas More, and its definition is, unironically, “nowhere” (Britannica, 2019). But places like Omelas may imply that the classical definition of “Utopia” might only touch some aspects of an utopian society. In Omelas, the citizens were able to create a seemingly perfect civilization, a place where everything is exactly the way it is supposed to be, but the readers are partially guilty too by participating in their own mental construction of this world before they realize that their pleasures are derived based on the sufferings of a child.

There are a lot of themes involved in the story, but I think that the “utopian” aspect deserves a deeper analysis because, while it is not as apparent as other major themes, it does serve as a foundation of the story. As mentioned above, the term “utopia” refers to a place that does not exist and actually, the name itself already denies the possibility of designing a “perfect” society. In this story, by hiding the reason for Omelas’ happiness until the end, Le Guin not only wants us to question ourselves as to the price of building such a society, but she also wants us to consider the human costs of our privilege of living in our existing, modern, developed society which is far from being qualified as “good”, let alone an actual utopia. Additionally, the child prisoner serves as a warning, a cautionary tale for those who want to build a utopia because in most cases, in the process of building it, some people will lose their humanity. At the end of the day, we all have different ideas as to the utopian model which would please everyone because our motivations and our worldviews are never really the same. So, building your own ideal society may pleases individuals who think like you, but for others, your “utopian” society is their vision of a dystopia. In the case of Omelas, the citizens have chosen to ignore the horrifying reality for the sake of maintaining a seemingly flawless community, but ironically, their heartlessness is the single reason why the readers see Omelas as a dystopian society rather than a utopian one.

In conclusion, Ursula Le Guin’s short story is a fantastic piece of literature which is still relevant in 2019 for its social criticisms and its ethical lessons. For instance, the story condemns human greed, and it serves as a cautionary tale of greed’s tremendous danger. In the story, the child is the elephant in the room. In the real world, we all have tendency to avoid tackling hard problems that affect us all, like global warming, the inefficiency of humanitarian aid, to name a few. We ignore these problems because humans not only do not like to deal with situations which are not an immediate threat to our survival. But also, because there are always corporate or governmental interests that are too powerful to tackle. Next, by presenting to us a moral dilemma in the story, which is the well-being of a child versus the well-being of a city, Le Guin forces us to question our own priorities. This situation is relevant to our current discussion on the price of technological and economic progress. As we all know, the wealth inequality is currently increasing at a startling rate. Some people will be left behind, and others will be able to join the next phase of human advancement. We should rethink our current way of measuring success and wealth because, if the well-being of one group of people is built upon the misery of others, what does this say about our current economical system as a whole? After all, our society is not very different from the city of Omelas, and in many ways, we are the citizens of Omelas. We may have limited options to take, but refusing to support the system is worth consideration.

English Science-fiction SF The Ones Who Walk Away from Omelas Ursula K. Le Guin
Leave a comment
Share: