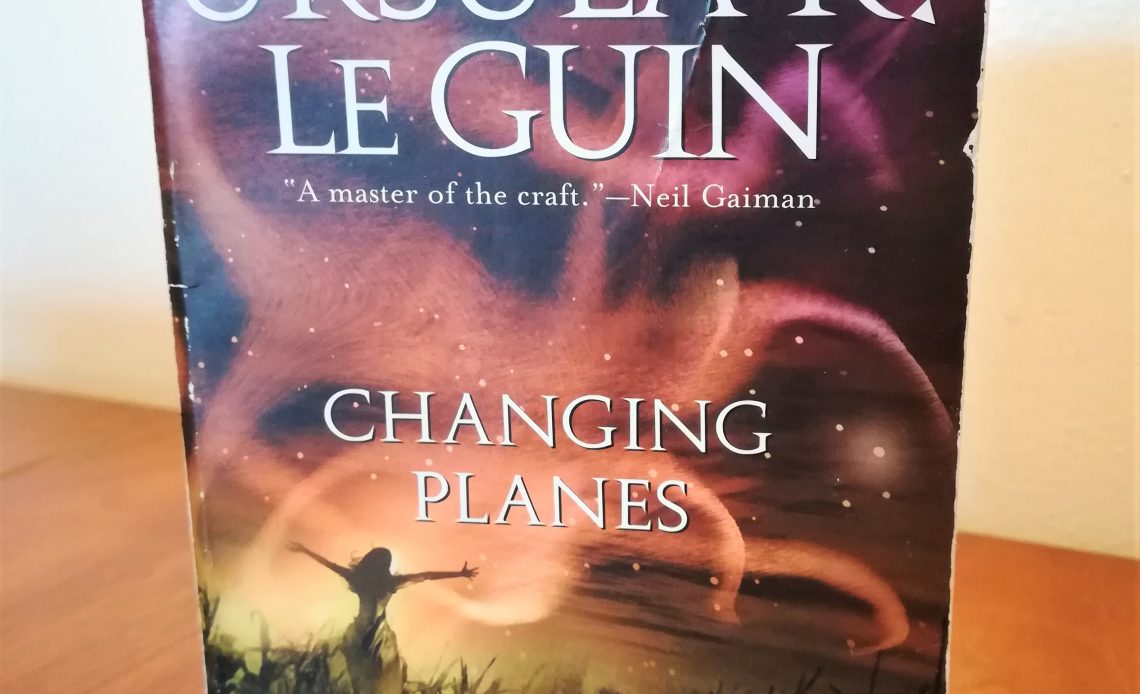 Ursula K. Le Guin’s Changing Planes is an inventive collection of short stories with great elements of realism. These elements are masterfully hidden within the different settings of the book, each representing various fully developed fictional societies that are all different from each other and all flawed, just as fully developed characters would be in our own communities. Through the fictional nature of this book, Le Guin reveals aspects of human nature and desires that express imperfections otherwise ignored by society. Changing Planes is a piece of literature with a fresh sense of cultural relativism. This work discusses the theme that, even though each culture is different, within all cultures there are similar qualities that can be understood and respected even as an alien guest.

Changing Planes is written as an anonymous narrator’s travel journal. This fictional guide is designed to take the reader to lands and settings that they would know nothing of, thus allowing them to be exposed to people and lifestyles that they meet for the first time with no prior frame of reference. The author refers to the means by which racial and cultural differences can be handled positively through the narrator’s interactions with the people of these different worlds. For instance, clear examples of this idea are the connection that the narrator feels with the Islac girl, Ai Li A Le, regardless of the clear differences, or the respect they carry toward the Ansarac’s reserved lifestyle.  Every chapter of the book reveals the stories told to the reader are just as much about the reader themselves as they are about the fictional characters.

The phrase ‘changing planes’ is a suggestion that one should change one’s perspectives and outlook, similar to the expression “walking a mile in someone else’s shoes”. We are exposed to fictional characters that have physical features that are not comprehensible to the reader; however, they also have qualities that are familiar. It is also interesting to see how tourists’ interactions with these people reveal how we behave as a society. The tourists in the chapters of this book are the most like us in how we react to and interact with new concepts of race, culture and even gender. We often judge new cultures and people based on our own ideas instead of trying to understand them for what they are with respect to their nature. The most impressive element of this impressive piece of fiction is its ability to speak to the reader on a personal level and expand their acceptance in regard to the different points of view in different societies and communities.

As a reader, there were many instances in which I could make connections with the stories about present and historical contexts in the real world. For example, the story, “Seasons of the Ansarac” is an allusion to the European assimilation of the Indigenous. Kergemmeg refers to the invaders of the Ansarac people as having “full of knowledge, with high sciences and great ease and luxury of life” (Le Guin, 69), and goes on to describe his own people as “little more than animals” (Le Guin 69) as compared to the invaders. This outlook is similar to the way Europeans powers considered the class difference between their society and that of the indigenous people. The story alludes to human greed and a lack of sympathy for an unfamiliar community that has happened throughout history and is happening in the real world today. Le Guin’s Changing Planes speaks to the reader and questions their morals and behaviors.

Personally, I, as a reader, find the author’s use of characterization to be her most intriguing element. As the plot develops, Le Guin increases the humanistic elements of each character, allowing the reader to be able to fully understand the character and slowly build an association with them. At the beginning of each chapter, a new environment is introduced, and as the story progresses the reader is exposed to more characteristics of the people and these lands, so that, by the end of the chapter, these people are fully developed and the reader feels sympathy for them. Through Le Guin’s fictional characters, we uncover our own lack of acceptance and respect in regard to new cultures.

Ursula K. Le Guin’s Changing Planes applies to our day to day lives as members of society. This book is very telling as to how we perceive and approach new customs, and how each heritage has its own fully developed characteristics. This collection of short stories expresses the idea that every culture is both unique and flawed, which is a truth more often ignored than respected.