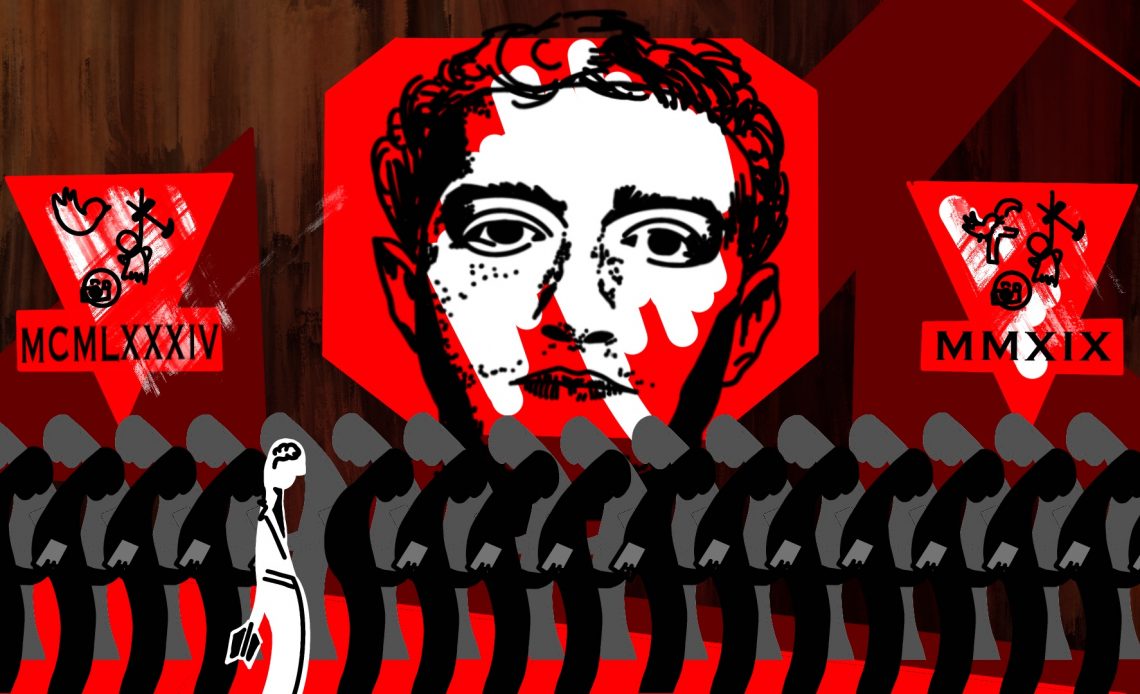 In light of recent political turmoil, objectively true facts and logically explainable actions struggle to survive in the raging media war. Social platforms bombard the general population with information and opinions tailored to match set beliefs of the consumers instead of delivering objective news offering a wider variety of perspectives. The media, therefore, ensures the readers’ satisfaction, keeping them in an echo chamber where all other opinions match their own in order to generate more profit. In some cases, such articles even fail to remain factual. While it may stimulate the economy, this trend towards increasingly radical, black-or-white content drives public opinion further away from facts which are generally found in between more nuanced shades of grey. This selective broadcasting of false or misleading information taken to its extreme is what Orwell warns against in his novel 1984 through the portrayal of an oppressive totalitarian government that maintains power through the absolute control of information, consequently creating a suffocating paranoid atmosphere.

The dystopian society created by Orwell in the fictional superstate of Oceania effectively illustrates a ubiquitous centralized government who creates a milieu where only its words are held to be true. If the Party says two plus two equals five, then that is the absolute truth and any other answers to the equation are inadmissible. The Party’s influence over its population is blatantly laid bare in the novel when Oceania, who has been at war against Eastasia for years, suddenly wages war against Eurasia. Mandating its Ministry of Truth to distort the historical records, the government of Oceania announces that it has always been at war against Eurasia, that it has never faced a conflict with Eastasia with whom they have always been allies. Disregarding their memory, the population has to oblige his new “truth”; thus, they start to hate the citizens of Eurasia. This spine-chilling tour de force is partly due to the masses’ lack of education, but, most importantly, because of the Party’s absolute control over the pervasive media broadcast.

Not only does the regime control the transmission of information, but it also collects information about its educated citizen’s through telescreens placed in every household that register every one of their words and actions. Individuals expressing independent thoughts that do not conform to the Party’s ideology are persecuted by the Thought Police. As a result, people live in a destructively paranoid atmosphere where they are constantly terrified of committing any misstep that could make them an “unperson.” In a society where the connection between words and facts fails to survive, the resulting manipulation of facts and human minds leads to an extremely toxic environment for its citizens.

While it ensures uniformity among its population, the Party’s frightening power over its people does not benefit society: rather, “The Party seeks power entirely for its own sake” and is “not interested in the good of others,” including its own citizens. In fact, the devastating social consequences of this totalitarian regime warns against the power obtained through complete control over media and public information. In order to maintain its power, the Party barely allows its citizen to eat, leaving them with too little energy to revolt. This continuous state of fatigue, coupled with the blatant lack of diverse information and the constant fear of sudden denunciation, creates an unhealthy environment in which no human being could possibly thrive.

A severely troubled, totalitarian regime, as depicted by George Orwell in his novel 1984, might seem quite far from our contemporary society. But, like telescreens, our cellphones are constantly tracking personal data such that algorithms recommend only specific articles in order to flatter our own views. This continuous stream of one-sided news can result in excessive reinforcement of one’s belief to a potentially unhealthy extreme. Technology is not inherently evil, and it has made our lives much easier, but it needs to be used intelligently. In order to avoid the trap of spiraling into radical extremes and being enslaved by one’s own very narrow ideology, it is best to keep an open mind, make use of critical thinking, and consider all sides of debatable topics while still possessing your own personal opinion. This effort to make sensible judgement could ensure a more educated, truthful and open conversation within a society, one based on respect and understanding while conserving one’s individuality.