Follow us
Actualité | Events, Articles, Out & About | Sorties culturelles

A Visit to Otakuthon 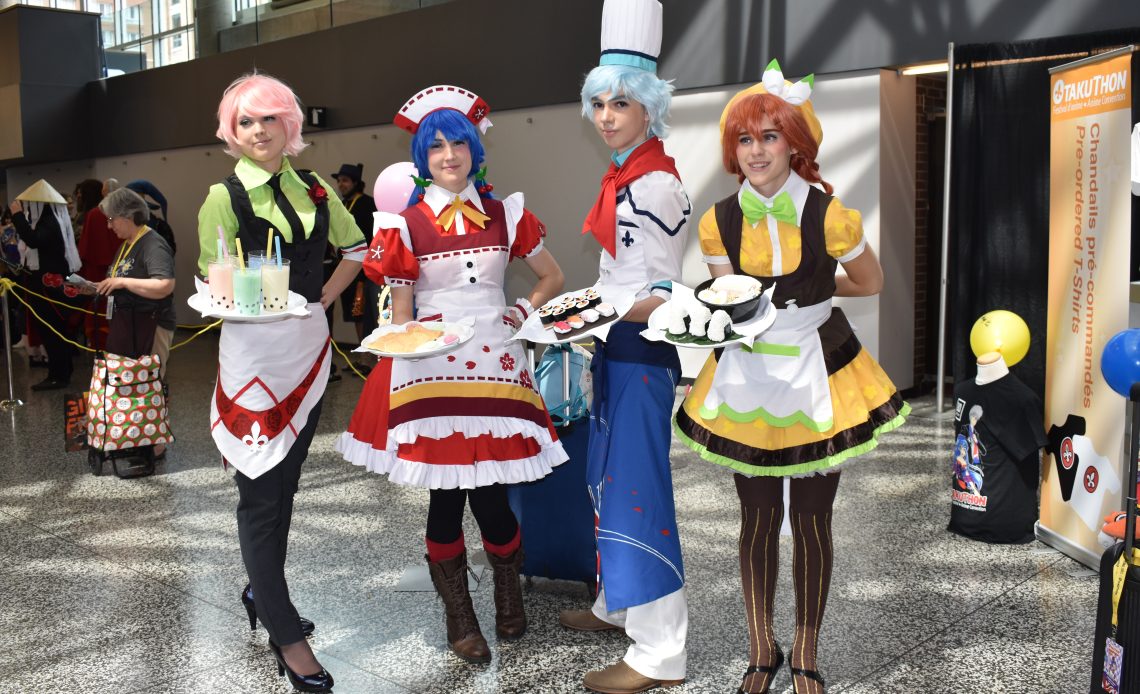 With overflowing passions as intense as Montreal’s crazy summer heat, Otakuthon 2019 continues to be a blast this year. This bilingual anime and manga convention attracts thousands of people from all over Quebec and abroad to join its fiesta. Interestingly, this convention is a mini representation of every year’s trendy popular anime/manga/game. Regular cosplayers depicting characters from Disney or video games are always present, but one can obviously notice the popular trends. For instance, in the few past years when Sword Art Online, Attack on Titan, Yuri on Ice, My Hero Academia, etc. came out, cosplayers representing  these shows were overflowing. There is nothing to complain about in this phenomenon since it is always enjoyable to take group pictures.

As a personal experience, the process of completing a costume is always accompanied with sweat and tears. One needs a lot of patience, skills and creativity to complete their costume. The feeling of accomplishment is immense upon completion, and it is further amplified when people recognize the efforts. That is why, you shouldn’t  hesitate to ask for pictures.

To make  the excitements and struggles more visible, here are the interviews with Labolduc Cosplay & Craft (facebook: @LaBolducCosplay) and her boyfriend Nikolas cosplaying as the King and Queen of all cosmos from the game Katamari, as well as Jonathan le Guerard (instagram: @capt_cosplay) the super fan of Captain America with his father cosplaying as a mecha version of Godzilla.

The couple’s big fancy robes flowing elegantly with each step as well as their unique headwear were eye-catching. I approached the duo and asked their permission for a quick interview.

XYL: What sparked your interest in cosplay?

Labolduc Cosplay: I’ve always really loved big robes, to make costumes. Then I discovered the universe of Cosplay. Since I really like creations and making costumes, things kinda flew along smoothly. And a friend introduced Otakuthon to me, so we decided to join in the fun.

XYL: Did you make everything by yourself?

Nikolas: I did the electronics and the lights, and she did everything else 😀

XYL: What were the challenges you faced?

Nikolas: My challenges were indeed the electronics. I needed to know how to sew in and to program the lights so that its portable and comfortable at the same time. And her challenges were to put the costumes from a 2D perspective into a wearable form.

Labolduc Cosplay: Yes, because these are video game characters, so it wasn’t easy to recreate. That was quite a challenge.

XYL: What are your future projects?

Labolduc Cosplay: I am currently working on a costume of Aurora, a character from the video game “Child of Light”. Otherwise I am making recreations of historical robes from the 18th century from the scraps remaining from this times’ costumes. I recycle whatever materials I can to make my costumes.

XYL: Last question, out of pure curiosity. Is it hot in your costume?

Nikolas: There’s not a lot of air conditioning here. Even if the fabrics are pretty light, it seems like they don’t allow transpiration that well. It’s part of the pleasure.

And this concludes the interview. Please go visit @LaBolducCosplay for more awesome creations!

This costume is not only an imposing size, but it also has lights and can make sounds. At first, it was really hard to interview someone wearing such a large mask. It also meant that I got into other people’s way while taking pictures. However, the hesitation ended quickly and was taken over by curiosity; it was hard to resist knowing more about this cosplay.To my pleasant surprise, the mecha-godzilla costume was made by Jonathan le Guerard, and his father who really loves Godzilla is wearing it.

According to Jonathan, the steps leading to the completion of the costume were detailed and long. However, as all could see, the results were definitively worth it. There were a lot of challenges, especially when making something this big. First the drafting of the costume had to be made. He had to design the mecha version of Godzilla, plan how the entire thing would look, and then how every piece should fit together in reality. This costume is a compilation of details. First, there’s the big frame, only after thatcan the smaller parts be added, which takes a lot of time and effort. The electronics for sound and lights are inside the costume too, and were also big challenges. Jonathan almost didn’t make it in time for the convention, but the resulting piece is, as the picture shows, truly amazing.

And last but not the least, here are some tips for people who are interested in the genre and would like to join Otakuthon in the future: