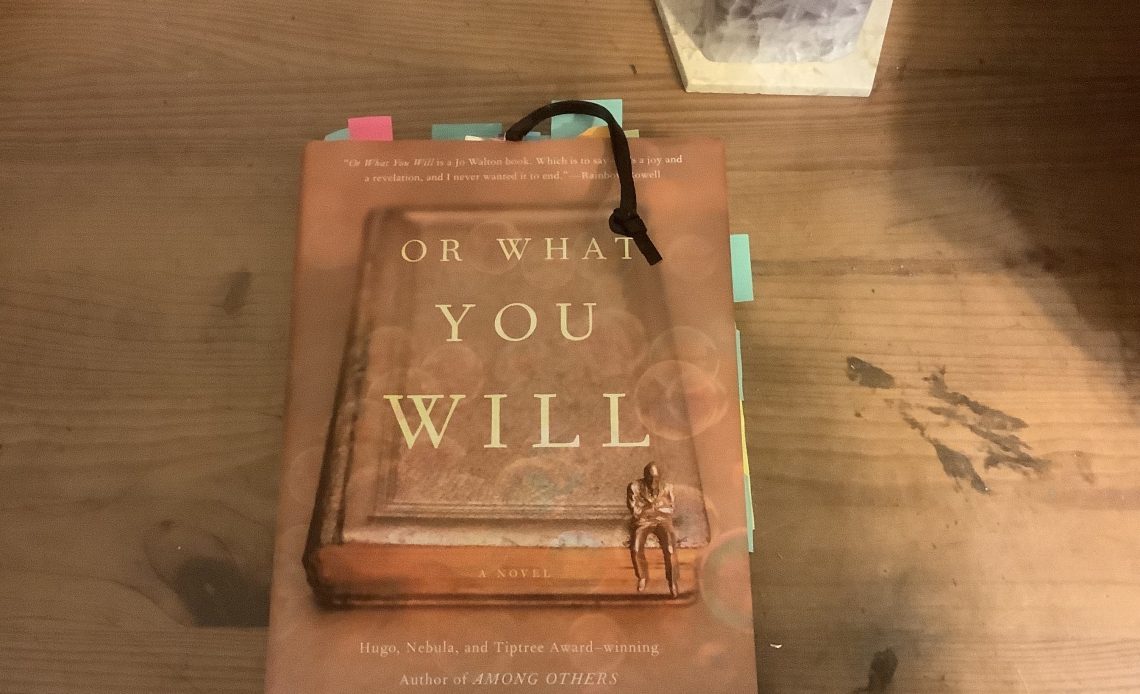 When I got the chance to be part of a round table with Jo Walton back in June, I was overjoyed. I had read and loved both Among Us and Lent, and she gave really interesting answers to my questions (if you’re interested in listening to that conversation, there is a recording of the full event on Opuscule). During the event, Walton also read an excerpt from her new book, Or What You Will. This meta fantasy novel straddles the line between reality and fiction, and touches on the subjects of authorship, the relationship between an author and her characters, and legacy.

Walton effortlessly balances several luscious worlds in a single novel, linking together the present—well, the 2018 present for the fictional author—with the fictional past of that author’s imagined universe. I have never encountered a story that blends the genres of fantasy and drama together with a künstlerroman in this way, and it is a wonderfully unique read. In the modern day, Sylvia is a delightful woman in her 60s, who has lived a storied life and enjoyed an illustrious literary career. Her journey to write her last book and potentially enter the world of Illyria, the first story she created, is truly moving. Leticia and Adolfo, 19th century time-travellers native to the fantasy land of Illyria, are also compelling additions to the story. While they come into Sylvia’s timeline to open the gates for Sylvia and her companion, they quickly take on vivid presences of their own, and it is easy to forget that they are completely fictional. They help the uninitiated reader understand the world of Illyria, since Sylvia—and by extension the narrator—are already very familiar with it.

Although this story is radically different from Walton’s other works, it still shares some aspects of her style and passions. For example, both Lent and Or What You Will prominently feature the city of Florence—mainly referred to by its Italian name, Firenze—during the Renaissance period. In both novels, Walton dives deeply into the history of the city, dispelling common historical myths and showing how people of different social strata lived at the time. I am thoroughly impressed with Walton’s dedication to research, including the way in which she openly admits when facts are unclear or unknown, such as the purpose of a building, or what kind of meal a poor person might have on a holy night. Walton’s meticulous research allows her to paint a very vivid picture of the warm, bright Firenze in the summer of 2018, which pops out of the pages even during a cold, dark Montreal winter night. Rather than overwhelming the senses, Walton’s lush descriptions settle in the mind as if they were always meant to be there, and give the reader the necessary amount of details to imagine scenes and events for themselves.

Or What You Will also conveys an immense love of both reading and writing, which also permeates much of Walton’s work. Characters from several other famous literary works—both real and invented—are mentioned in this story. I found the way in which Walton re-imagines Shakespeare particularly interesting, as she lets the characters from Twelfth Night and The Tempest live in the city alongside the characters created by Sylvia. Even characters who only appear briefly—such as Giulia, an apprentice to a powerful magician, who takes in Leticia and Adolfo when they appear—leave a strong impression.

One of the most fascinating voices is “the Narrator”, a male voice in Sylvia’s head who dictates part of the book. Defined not as one character, but as a shape-shifting entity who can mold to fit many characters in both Sylvia’s imagination and in her actual works, the Narrator serves both as an imaginary friend and as a creative muse. Although he is beholden to Sylvia, as he is trapped in her “bone cage”, he is very much his own person. He complains, argues with Sylvia, and even gets her to include some personal details in the story that she might have otherwise left out. The Narrator seems to be Sylvia’s permanent companion. He believes that Illyria offers him an escape; a chance to leave Sylvia’s dying body and finally be his own separate entity. I have encountered such depictions of creativity before, but never one with as much spirit as the Narrator. He is a cunning, witty character and endowed with a very strong sense of self-preservation. Thanks to him, Sylvia is able to confront her own fears about death, and immortalize both of them in a final book where she returns to the first world she created: the magical Illyria, a renaissance paradise where no one dies unless they actively choose to do so.

Although sometimes the Narrator’s interventions in the text of Sylvia’s book feel a bit abrupt, the reader gets used to them as the story progresses. The chapters are clearly divided into sections that are “meta”, some personal sections about Sylvia, and chapters from the novel about Illyria, but these blend together naturally, conveying a sense of real life crossing over into an entirely fictional universe.

The story’s meta-narrative about creation is fascinating, especially its commentary on writing. Sylvia and the Narrator’s arguments about what details should be included and what would be too boring or self-indulgent are particularly amusing. The most interesting discussions, in my opinion, pertain to what it takes to build a world: are the descriptions of Illyria’s physical, social, and political world real enough? Are the characters vivid and three-dimensional people? Is Sylvia’s presence in the story sufficient? Although the novel answers none of these questions outright, I appreciated the implication that personal balance of these literary components will be different for any writer. Walton’s advice that grounding a setting in simple, realistic details and succinctly mentioning important world-building elements only at the moment when they become relevant to the plot is helpful to any aspiring author, while leaving the major stylistic elements up to the individual.

I do not cry very often while reading, but this gorgeous story brought me to tears twice. Or What You Will is an excellent novel that balances a meta-narrative about creation, the fear of death, love for the arts, and a compelling plot line—both in the story in general, and within the Illyrian narrative that Sylvia creates. I was a bit nervous about how Walton was going to juggle all of these elements, but the book wraps up with an immensely satisfying and truly moving ending. Walton somehow manages to create a story that is complete yet open-ended, leaving her characters room to grow and to continue having adventures, even after this particular story has finished.

New Perspectives on Tolkien: Review of The Nature of Middle-earth

Heart of Fire, Iron Will: The Unbeatable Iron Widow