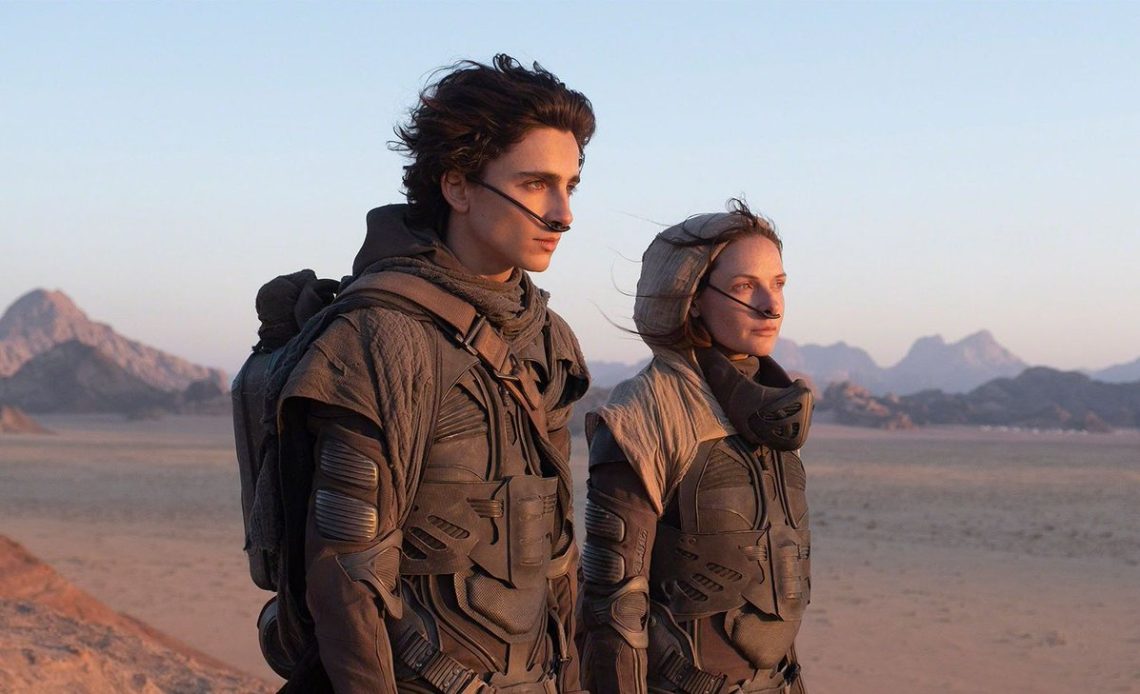 This past summer I told myself that it was time for me to broaden my speculative fiction horizons and delve into science fiction. Naturally, I picked up Frank Herbert’s 1965 sci-fi icon: Dune. Aware that a film adaptation would be released in the fall starring Timothée Chalamet, I flipped page after page with mounting misgivings. Translating from text to screen such an alien creation seemed doomed. Like many critics, I wondered––is Dune unfilmable?

Reading Dune is like spelunking through a very, very long cave. Some of us like that sort of thing: making our way through a text dense with jargon, charting out unearthly worlds. The storytelling is touching, but its human aspect only exists as a delicate thread. Herbert weaves it through layers of plot and intricate worldbuilding, often most prominent within not just Paul’s, but other characters’ inner monologues. In a book of the speculative genre, the inaccessibility of his material alienates us in a good way: as our instinctual craving to see ourselves within the text intensifies, those elements which are indeed akin to our current experience stand out more starkly. But commercial filmmaking has its constraints. Like most mainstream theatregoers, I’m not looking to hike through intellectual caves, just to enjoy my two and a half hours of escape.

Aside from the challenge of rendering onscreen this impenetrability––so highly characteristic of Herbert’s work––the novel also bears an unfortunate generational stamp. Women and ethnic minorities are not always treated so tastefully. It’s not all bad, mostly complicated: I’ll say only that I hoped the film might flesh out the female roles and be wary of when cultural inspiration verges into exoticization. All this to say––if I were a film director, I wouldn’t want to touch Dune with a twelve foot pole. I’d gladly go to see it, however, notepad in hand.

As it turns out, Denis Villeneuve has understood what we naysayers have not. For if Dune is ‘unfilmable,’ then there must be a right way to ‘film’ a novel. But what is the right way? Those who knew I’d seen the film in theatres often asked me my impression of its faithfulness to Herbert’s novel­­––a common question––but how is a film director really to be ‘faithful’ to a text? A faithful adaptation would not be a recreation, a scene-by-scene replay with exact dialogue and voiceover. We would all be bored out of our minds. Similarly, would anyone disagree that it may not be best to preserve a work’s past prejudices in the name of being ‘faithful’? So before we declare a text unfilmable, perhaps we should stop and ask what makes a faithful adaptation. Dune is Villeneuve’s answer.

The film sketches out the basics of Herbert’s plot without drowning in details. Paul (Timothée Chalamet) is our adolescent protagonist. His father Duke Atreides (Oscar Isaac) prepares to assume control over Arrakis––better known as Dune. The universe covets this desert planet for its spice, a consciousness-enhancing narcotic which enables space travel and to which many powerful nobles are addicted. Needless to say, Paul is from the film’s outset at the centre of a sticky political web. Many sets of mandibles click in scheming against his House––the Harkonnens, the Spacing Guild, CHOAM, the Emperor himself––while the Fremen indigenous to Dune remain aloof, their threats difficult to assess. Villeneuve does weave this web, but we miss out on some of the intrigue’s tension stressed in the novel.

Through the visuals and the soundtrack Villeneuve translates Dune’s strangely ancient atmosphere. Anyone who has ever seen one of his films will note its visual beauty. He renders each frame as quietly breathtaking, not flashy as sci-fi films commonly are (@TheMarvelCinematicUniverse). House Atreides’ citadel on Arrakis recalls the architecture of Ur. On Caladan, reliefs on gravestones feature iconography reminiscent of ancient Persian or Babylonian friezes. These nobilities do not live in a Disney castle; their power is gritty, rooted in history. Musically, Hans Zimmer’s score is a massive soundscape that fuses your typical orchestra with electric guitar, throat singing, and even bagpipes. Middle-Eastern hand percussion and loud choral chanting punctuate a bass drone, capturing the planet’s primitive, sacred, and fearsome character.

Dune also takes its time to unfold––the ending being one crucial exception. Some may have felt that the pacing dragged, but I found it refreshing to be invited into rather than rushed through a film, to be granted time with which to simmer on scenes whose script and shots are packed with meaning. Productions flashing from action scene to action scene may fill seats, but their adrenaline rush will never satisfactorily replace Villeneuve’s judicious treatment of violence. I remember one moment when the massive soundtrack drops out, and in complete silence, the deathly Sardaukar float down from the sky like feathers––so cool, yet so horrifying. For Villeneuve, each second holds weight. From the Duke’s hand intimately touching the back of Jessica’s neck, we intuit how this couple relies on each other during the power struggle over Arrakis. From Paul’s hands also––slipping on his father’s seal ring, hiding it from the camera and from his own line of sight––we preview his conflicting internal desires, both to claim and to hide from authority. Villeneuve explores each page of Herbert’s novel with such intentionality that his respect for its author is visible.

Dune’s characters walk the line between human and non-human, and in this respect the star-studded cast did not disappoint. I couldn’t help but laugh and marvel as Chalamet, just before a duel we expect to end in his death, delivered a line which went something like this: “Chani?………..Nevermind.” His struggle for words was so perfectly awkward: How can you tell someone that you’ve seen the future––and that in the future they will fall in love with you––without sounding psychotic? Or simply, how does a teenage boy even speak to a girl as terrifying and gorgeous as Zendaya? As far as villains go, Baron Harkonnen (Stellan Skarsgård) is the least human character and to be frank the least interesting. (Feyd-Rautha, one of my favourite Harkonnens, has yet to appear. But I’m hoping he will show his face in Part Two, to be released in October 2023.) Unadulterated villainy has become less popular in the past decade or so, but I think that Villeneuve tucks the Baron into the background to properly foreground the greater, more nuanced threats to Paul’s growing power, such as the Fremen.

In Herbert’s book, Paul and Lady Jessica (Rebecca Ferguson) trek through the desert as explorers; they seek out Arrakis’ indigenous tribe with the name of Duke Atreides as claim to their hospitality. Villeneuve, on the other hand, imagines a new dynamic: What if the main characters are invited to share in the Fremen’s ‘desert power’ rather than discover it for themselves? Just after the film’s midpoint, for instance, Lady Jessica and Paul turn back to see their home on the horizon, still burning from the bombs. All of a sudden, they are exposed, vulnerable, reliant on Fremen knowledge to survive in cruel ecological conditions. Stillsuits and Fremkits are no longer cool cultural artifacts to be discovered, but technology that they are lucky to have. The power dynamic––between occupier and occupied––flips. Looking back, I see Paul’s glimmering visions of Chani (Zendaya) as invitations: “Follow me,” she implies, embodying the power of a leader who gracefully condescends to show a clumsy foreigner how things really should be done. It’s this rhythm of Fremen invitation, not Atreides discovery, which differentiates Villeneuve’s Dune from Herbert’s.

Another nuance which Villeneuve brings is to reinvigorate the boundary as a space of power. None of the non-white characters are centred, but even from the wings, they manipulate the main action. Dr. Yueh (Chang Chen)––who I was so prepared to write off as an exotic stereotype from the get-go––emerges from our lack of notice as a subversive figure. Villeneuve tones down his role, yet this unremarkable character totally unhinges the plot. (If only he could have bitten down on that tooth himself.) Similarly the gender-swapped Dr. Kynes (Sharon Duncan-Brewster) holds her cards close to her chest. As much as I missed witnessing more of her ecological nerdiness, her acts of defiance and reverence for Shai-Hulud were formidable. The Fremen too display a complete unbotheredness towards House Atreides. When Stilgar (Javier Bardem) first spits at Duke Leto, we cringe at the cultural dissonance, but soon, the Fremen leader’s I-don’t-give-a-sh*t attitude vis-à-vis the planet’s occupiers demonstrates his boldness and strength. (Too bad Paul’s duel with Jamis (Babs Olusanmokun) was so unremarkable, however.) Lady Jessica is mercurial like her book counterpart. Mother, concubine, Bene Gesserit––the multiplicity of her roles makes Stilgar’s misreading of her martial abilities (the that-woman-can-fight?! trope) fall a little flat, but it’s a small misstep in the minefield that is Dune. I admit that on the whole Villeneuve has impressed me. He respects the Fremen as Herbert created them––powerful, strange, cool––and yet elevates their aloofness from what could be exotic schmaltz to something truly dignifying.

Overall, Denis Villeneuve has indeed managed to adapt Dune faithfully. He recognizes that a good adaptation doesn’t recreate but innovate. He preserves, faithfully, the essence of Dune’s strangeness––its fusion of ancient and future worlds––while creating his own inspired riff. Aside from being treated to such a visually appealing re-imagining, I appreciated watching how Villeneuve integrates characters on the periphery, how he transforms them into powerful agents of the narrative. Just as Paul and Lady Jessica move throughout the film from centre to boundary, they learn what perhaps we too should learn: Our gaze can never create or validate the worth of those who exist outside of it.