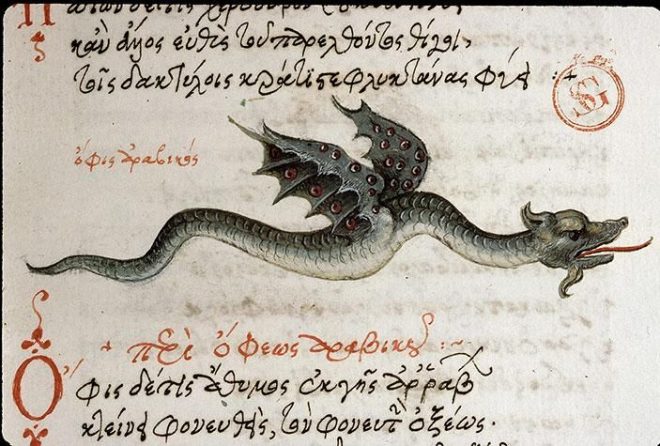 The Penguin Book of Dragons, edited by Scott G. Bruce, is a delightful foray into the fantastical universe of dragons. I use the term “universe” deliberately: as this collection of stories shows, dragons are everywhere. Featuring eight sections divided by time period and geographic region, The Penguin Book of Dragons delves into battles, origin stories, religious allegories, and even encyclopedic entries that have been recorded by various authors throughout the ages. Each story is abridged to the relevant bits that feature dragons, and a host of detailed notes and italicized prefaces to each section allow for full immersion in the tales without losing too much context. Consequently, The Penguin Book of Dragons comprises not only a great deal of dragon-related information, but also provides a telling literary-historical-cultural tour of the world from Greco-Roman myths all the way to modernist stories.

The collection especially highlights how these tales balance fantasy and reality. Some of the entries are encyclopedic, detailing the facts of dragonhood, while others take a more narrative shape. Even the bestiaries and historical surveys, however, acknowledge the myth that surrounds dragons, not denying their existence but attributing to them a mystical uncertainty that elevates the entire subject. Furthermore, the collection avoids passing judgement on any of the stories it presents: the prefaces before each section of stories serve a contextual, rather than editorial, purpose. This is something that I very much liked about The Penguin Book of Dragons—it invites you to form your own opinions.

Few, it seems, are as persistent in reshaping the concept of dragons into religious allegory as the medieval Christians are. Many of The Penguin Book of Dragon’s entries feature medieval writers, and the repeated instances of classical plagiarism in medieval texts are both humorous and telling. Plagiarism, it seems, is a minor issue when death and illness lurk around every corner) Many of the hagiographic tales presented are formulaic, focusing on an evil dragon, representative of sin or Satan, that attacks a pure man or woman who then slays the dragon through prayer. But more universally—and far from exclusive to medieval writers—is the fact that humans across time and history are very good at describing the deaths of dragons in grand, grotesque, and gory detail. Blood spurting, swords slicing, poisonous breath desiccating—formulaic or not, the deaths of dragons are always frightening and awe-inspiring. Despite being agents of evil, dragons are at least granted a mighty death no matter what region or time period they are vanquished in.

Less awe-inspiring, however, is the subtle xenophobia that often permeates Roman and Greek legends surrounding dragons. The dragons of these stories hail from lands described as barren and death-ridden, which overwhelmingly correspond to areas in the Middle East and Africa; this subsequently informs later Christian interpretations of, and associations with, dragons as emblems of evil. Although some Greek and Roman stories mention the Middle East, the collection features predominantly European authors who frequently “otherize” these people and countries, aligning them with dragons as an alien opposing force.

There are few Middle Eastern interpretations of dragon stories found here (two, to be exact), though the collection does feature a “Dragons of the East” section that focuses on Asian dragon folklore. Eastern perspectives on dragons are quite different from traditional European ones in these stories; the dragons ask humans for help and are polite and grateful in return. They act human, though they are also elevated into godlike figures, as they bless humans with gifts and transform themselves into various animals. The respect given to dragons in these stories is not gained by the creatures’ fearsomeness or brutality, but rather by their dignified stature. Violence is not the central aspect of these stories, unlike those of the medieval saints.

Despite European tendencies to bash on dragons, many of these creatures also offer moralizing lessons. After roughly 300 pages of various brutal slayings, it might seem that dragons are mainly demonized literary foils, but this is not the case. For example, the dragon of Beowulf and the wyrm Fafnir of Old Norse folklore act as cautionary tales, both representing the miseries brought on by selfishness and greed. As quickly as characters want to get rid of their foes, dragons nevertheless remain alive in many cultural imaginations. Beyond this hatred we can see the value many cultures place upon the bodies of these creatures, which often have medicinal properties or house priceless diamonds. Why is it that the deadliest creatures are also those which can save people? Perhaps the principal value of dragons is the moral contrast they provide. Dragons are evil, greedy, violent, and selfish, and as long as people bear witness to this difference they can receive the metaphorical diamond of superior moral standing.

One anonymous standalone writer, claiming to be the medieval John of Damascus, offers a surprisingly sympathetic view of dragons. According to him, in the grand scheme of God’s creation, they are simply natural creatures. And for all the mentions of death and doom, we also hear of humorous aspects of dragon lore. For example, in “The Dragon of Wantley,” the hero and the dragon kick and fart their way through a crude, humorous song. Dragons take on more than the simple role of villains: they delight, instruct, frighten, and entertain. Whatever the stories say, people like dragons.

The Penguin Book of Dragons makes this point, too, in its final section, which features literature from the modern period. Finally, the trope of the evil, powerful, often-Satanic monster is subverted. Children’s literature reimagines the dragon as helpful, friendly, and misunderstood. The question remains, of course, as to why it is only in this genre that the creatures can be accepted as other than evil. The collection stops at an Edith Nesbitt story, published in 1925, so contemporary literature on dragons is not included; perhaps this is where their sympathetic adult portrayal lies, for today dragons are hardly considered the same way as their apparently-Satanic forefathers.

Perhaps the many tales highlighting their violent, evil, and terrifying natures weighed more heavily upon the historical listener than the slim portion of stories that detailed their kinder and more cautionary traits. Personally, I found it impossible to ignore the simple fact that it is always humans that apply these traits to dragons throughout the Western European stories. Dragons act as a convenient conduit of evil, an easy trope to add fear and mystery to any tale rather than existing as developed characters. Interestingly, the heroes in these tales are often as one-dimensional as the villains themselves. This is why I found the Northern European and Eastern stories on dragons to be the most engaging, for they provided a much more nuanced understanding of the creatures. Yes, they could be terrible and destructive, but they existed as thoughtful counterpoints to human actions, helping them in accordance with their own rationality. The Penguin Book of Dragons is an engaging way to immerse yourself in the world of dragons. Each section is a short trip to a different land and time period, providing a fascinating blend of fantasy and history that make its 300-plus pages flow by with pleasant ease. At times the prose of older stories can be challenging, but the notes provided by the collection allow for an agreeable experience reading tough texts. One of the strongest points that The Penguin Book of Dragons offers is the way in which these stories are gathered and presented, allowing for a compare-and-contrast over history and geographic location. We learn about dragons, certainly, but also much about ourselves.