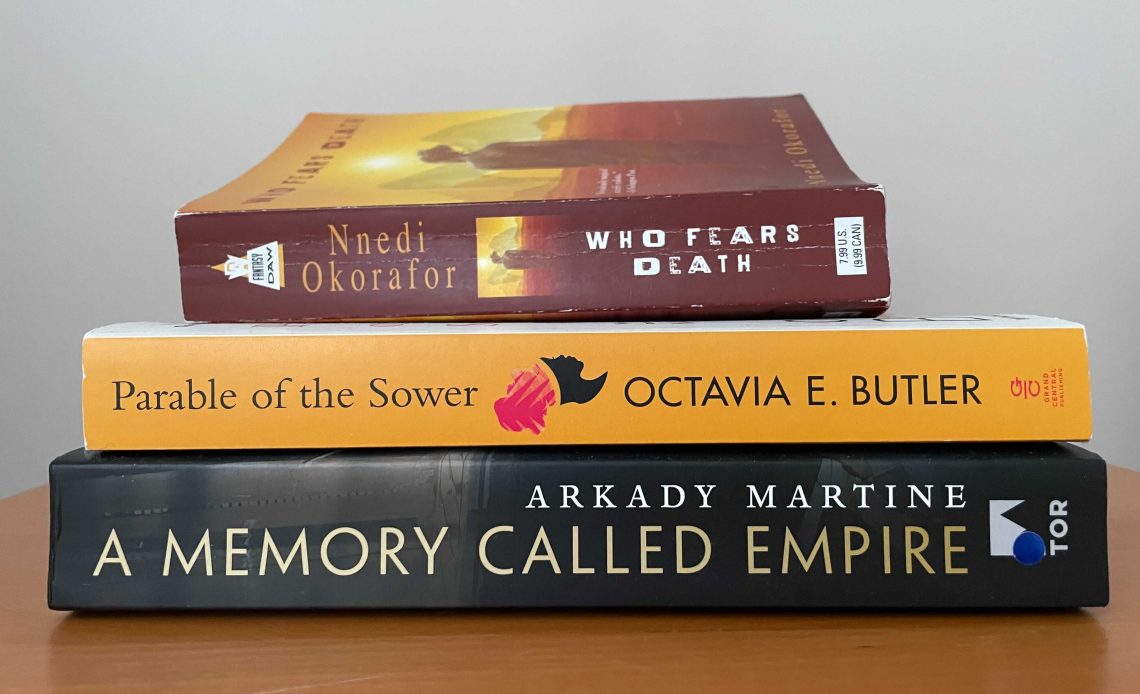 When I bought my copy of Who Fears Death, around five years ago, it was my first time reading a science fiction or fantasy novel with a Black girl as the main character. Since then, there has been an increased interest among readers to see more diversity within speculative fiction. While several series with female protagonists have been popular in the last decade, such as dystopian YA hits like The Hunger Games and the Divergent series, these books generally feature white, heterosexual, able-bodied protagonists. The characters who don’t fit within these labels are relegated to secondary roles which are often sidelined or one-dimensional.

Even in cases where the entire plot takes place in a distant future or on a different planet, most societies in the SF/F fiction that I’ve read are heavily influenced by Western societies and the majority of the characters are generally white. Who Fears Death, an adult science-fantasy novel by Nigerian-American author Nnedi Okorafor, is an excellent example of this recent shift towards SF/F fiction which draws inspiration from non-western locations and mythologies. Okorafor blends science fiction and fantasy to create a world which integrates futuristic technologies alongside elements of Nigerian folklore. While many have referred to this novel as an Afrofuturist work, Okorafor refers to her own work as being Africanfuturist and Africanjujuist given that it centers “African [not African-American] culture, history, mythology and point-of-view”, terms which she has invented herself (1).

Who Fears Death is set in post-apocalyptic Sudan, where the light-skinned Nuru are trying to eradicate the dark-skinned Okeke people, who they view as inferior and “natural slaves”. Najeeba, an Okeke woman, is raped by a Nuru sorcerer and then forced to flee into the desert to give birth. Her daughter Onyesonwu spends the first years of her life living with her mother as desert nomads until finally settling in Jwahir, where Najeeba remarries. As an Ewu, the product of the rape of an Okeke woman by a Nuru man, Onyesonwu is viewed as violent and is mistrusted by most in her village. When she discovers her magical powers, she begs the sorcerer and village elder Aro to teach her to hone her skill. While he is initially reluctant, he eventually agrees. However, when staying in Jwahir becomes too dangerous, Onyesonwu sets off on a quest. Alongside her partner and her best friends, she goes on a quest to kill her father, who is revealed to be the general of the Nuru army exterminating her people .

The quality and level of detail of the author’s worldbuilding was one of my favorite things about Who Fears Death. Her descriptions, from the water capture stations to the villages that Onyesonwu passes by on her journey, truly immerse you in the world, making the experience of reading this novel all the more interesting and enjoyable. Including elements of Nigerian folklore and tradition also add to the depth of the settings. Furthermore, Okorafor effectively portrays the many ways in which women are oppressed in this fictional world, mirroring the ways in which women are oppressed in real life. From the violence that women face during military conflicts to more mundane difficulties, she creates and describes a patriarchal society from a very convincing woman’s perspective.

The sexism that’s so deeply ingrained in Onyesonwu’s culture is well described. For instance, her passionate and fiery personality often prompts her partner Mwita and Aro to comment that she is being too emotional. Her gender also makes Aro accepting her as a student an especially difficult ordeal, even if he never explicitly states this when refusing her. Despite the fact that she urgently needs to learn sorcery for her self-protection, it takes several years for Aro to allow Onyesonwu to be initiated. Mwita resents having to occupy the role of the healer, because sorcery is seen as a traditionally masculine endeavor, whereas healing is for women. Women in Jwahir are also expected to undergo the Eleventh Year Rite, where they are subjected to female genital mutilation. Consequently, this ceremony renders the act of having sex before marriage extremely painful for women. While this makes it far less likely that girls in Jwahir get pregnant before marriage, it places this burden entirely on women in an extremely painful manner.

The characters in this novel are all generally well developed. The portrayal of the teenagers and their group dynamic was very realistic and keeps you entertained during their long journey through the desert. While Onyesonwu’s friends could have had larger presences, their relative insignificance to the main story could very well be a reflection of her own mistrust of them for a large part of the book. Of course, Onyesonwu is the character whose personality is best fleshed out, and the author does an excellent job in showing us her motivations, frustrations, and character evolution throughout the novel.

The first time I read this novel, I really enjoyed how different it was from the majority of the SF/F novels, which I’ve found can become quite formulaic. Even if it’s set in a totally alien setting, SF/F can teach readers about different peoples’ values, as well as expose them to different traditions and mythologies. Reading more from diverse authors allows us to look at the futuristic situations through alternative lenses and to learn more about cultures which are less represented in mainstream media. Even though the book is set in Africa and the Nuru are described as having “skin the color of the Sun”, it was interesting to see that several readers have assumed that the Nuru are white. This is certainly not the first time readers have assumed a character was white despite the author’s descriptions. Notably, many fans were shocked to find out that Rue from The Hunger Games was actually Black. What this might expose is the biased expectations some SF/F readers may have going into these works and that some specific demographics and cultures might simply be over-represented in the genre as a whole.

I also enjoyed the complexity of the time-leaping narrative. While we learn early on in the novel that Onyesonwu does not get a fairy tale ending, from discovering her powers to her journey to assassinate her father— following her adventure keeps you captivated as a reader. I enjoyed the ambiguous ending, and the fact that the story did not attempt to instantly solve everything from the moment the villain was defeated. However, I found that the ending was slightly rushed, given the disproportionate amount of time which focused on Onyesonwu’s childhood and her time in the desert. This left me feeling unsatisfied and slightly disoriented, as if something was missing from the end of the novel. I would recommend Who Fears Death to fans of fantasy, especially those who enjoy works which incorporate elements of different mythologies (if you were a fan of Rick Riordan’s books when you were younger, you’ll probably like this one).