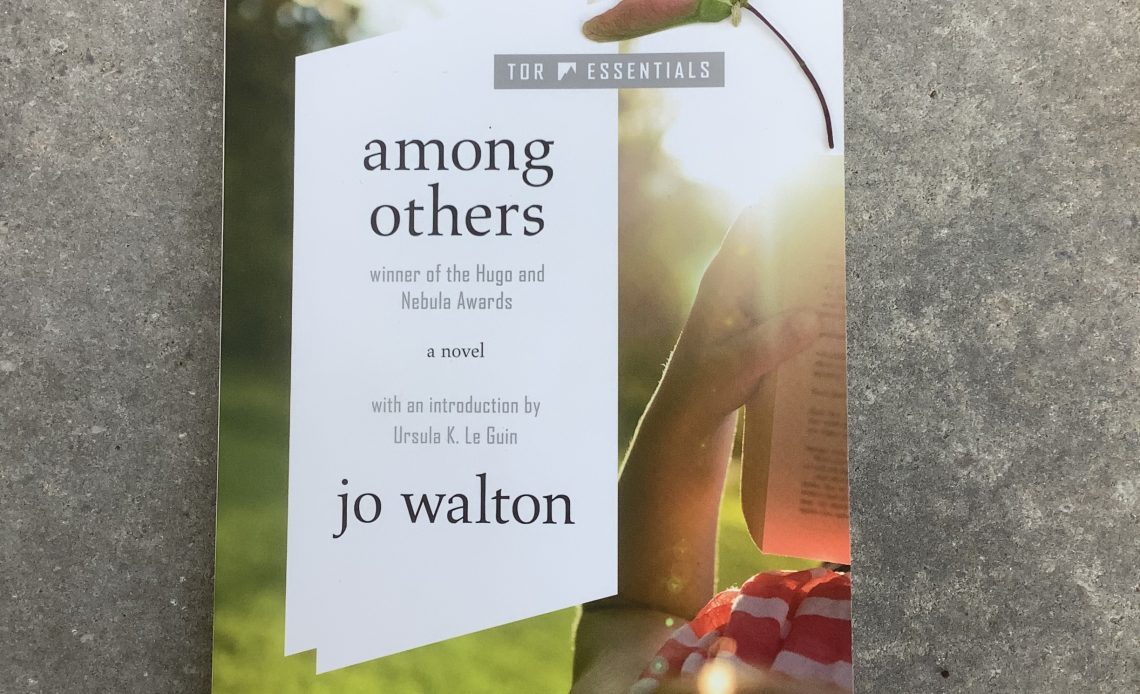 There is something magical in discovering a surprisingly good book. Many books adorn their cover with award stickers and critic quotes to draw in the reader, but I’ve always preferred to let the story speak for itself. So, when I got my copy of Among Others, by Jo Walton, and the cover advertised its Hugo and the Nebula awards, I was a bit skeptical. Would this book really be the award-worthy kind of story that would stick with me, or would I be disappointed?

Fortunately, the book surpassed all of my expectations, and cemented itself a place in my collection of favourites. The novel begins with Morwenna Phelps being sent to stay with her estranged father after running away from her mother. However, due to her attitude she is suddenly packed off to an English boarding school and forced to live alone in an entirely unfamiliar environment. Morwenna is a compelling protagonist. Using a personal diary to tell her story, she provides wonderful insight into her thought processes. Since there are no chapter divisions, it’s easy to slide into her life and suddenly realize that you have just read through three months of events and feelings, and the characters have developed a bond which would have been painstakingly slow to observe in real time.

Walton’s novel perfectly straddles the line between reality and fantasy. She brilliantly captures the attitude of a real, surly, socially-awkward teenage girl with a small difference: Morwenna knows that magic is real and interacts with beings she calls “fairies”. I was particularly impressed with the way magic is built into Walton’s universe. Since the only other magic user that Morwenna knows is her dark mother, the girl has to learn what to do on her own. A lot of spells seem to be about instinct, and magic is much more complicated than the neat systems of rules often used in fantasy literature. Most of the magic in Among Others comes from bonds: the more someone uses an object, the more magic the object gains. Family heirlooms can be used for powerful spells, and even dishes recognize their owners and prefer to be handled by them.

The way in which magic works in the book was especially appealing to me: if magic were real, it makes sense that it would be too large and complex for humans to understand. The fairies understand much more about magic, but with the cryptic way they speak it is difficult to understand what they truly mean. Thus, a lack of knowledge effectively imposes boundaries on how Morwenna can use magic. Moreover, magic is extremely personal and affected by each individual user’s beliefs. The idea of plausible deniability—that it will forever be unclear if magic worked or exactly what it did—feels like the missing piece to so many fantasy stories. Moreover, the way in which Morwenna discusses science-fiction and ethical concerns brings up an interesting parallel to modern-day technology, especially given how complex and difficult to understand the precise effects of a new device can be.

Another distinguishing aspect of this book is that Walton doesn’t shy away from tackling ethical concerns about magic. Since there is no way to tell just how much magic affects the world when it is used, there is concern that it could manipulate people’s minds. I particularly relished the moment when Morwenna is tormented by the realization that the magic she used to find a close group of true friends might have manipulated them all into liking her, and taken away their free will. Her loneliness at boarding school felt very real, and her dismay when she realized that she might have turned her friends into puppets seems to only further isolate her from the others. I loved watching how she chose to deal with the consequences of her actions, and her oath to only do magic to prevent harm to herself proved that she was a good person.

I also appreciated the casual representation in Among Others, whose cast of diverse characters brings colour to the story without delving into archetypes. Morwenna’s family is part Indian, and one of her grandfathers is a Polish Jew with whom she has several deep conversations about religion and Greek philosophers. Gill, one of the girls at Morwenna’s boarding school, is a lesbian and is attracted to her. However, Morwenna doesn’t think her sexuality is wrong or disgusting. She simply tells Gill that she isn’t interested and moves on.

This story is also an excellent portrayal of disability and grief. The practical details of needing to rest periodically and having to juggle carrying books with using a cane helped ground me in the story. Every time Morwenna talks about a memory including her dead twin sister and uses the word “we” instead of “I”, my heart aches. It is clear from the beginning that Morwenna has been through a lot, and as a result she socially isolates herself from others. These complications add yet another level of realism, as Morwenna is cut both from the magical fairies with whom she grew up, and from her family and friends in Wales.

Among Others is not a tale of a wild adventure or a foray into some other world: it is the story of what happens after the end of the great adventure. Morwenna and her sister have already defeated the great evil of their mother by the time the book starts, and now Morwenna is left to pick up the pieces and try to get her life back together. Morwenna’s tale is a story of recovery, and of learning to live again.

Morwenna’s diary is essentially a love letter to books, especially science fiction and fantasy. I didn’t recognize all of the authors named, but I thoroughly enjoyed reading Morwenna’s unfiltered opinions and harsh critiques of some authors. Walton’s decision to use books as a way for Morwenna to cope with the world, and subsequently find a way to connect with others through discussions, is absolutely perfect. There is nothing I enjoy more than reading a story about a character who loves books just as much as I do, and Walton captures perfectly the feeling of escaping into a good book. I also appreciate how often Morwenna goes to local libraries, and I dare you to keep from smiling as she waxes poetic about the blessing of an inter-library loan system.

Jo Walton has accomplished more in Among Others than some writers could in a lifetime of publishing. She managed to build a world with wonderful characters, show how Morwenna grows and evolves over time, and flesh out an understandable system of magic, all while writing a love letter to books, libraries, and devoted librarians. This novel is absolutely brill, and I loved it from start to finish. There is no better way to spend an afternoon than curling up with this book.

New Perspectives on Tolkien: Review of The Nature of Middle-earth

Heart of Fire, Iron Will: The Unbeatable Iron Widow