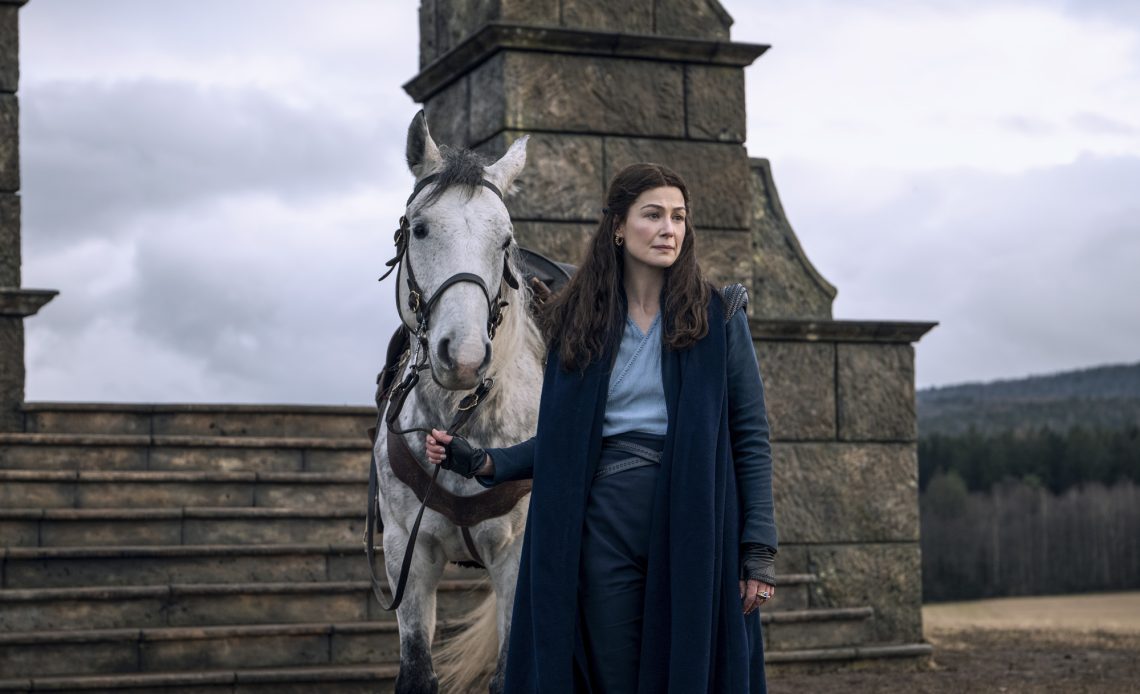 The sixth episode of Amazon’s The Wheel of Time is simultaneously the best and the worst episode of the season so far, as it contains some of the most questionable book changes. Following the arrival of most of the protagonists in Tar Valon, this episode dives deeper into the secrets and political intrigues of the White Tower—the tower that houses the Aes Sedai. And while no major battles occur, the emotion-filled episode marks a turning point in the series which promises an impressive and poignant finale.

After gentling the False Dragon in the last episode, Moiraine, Liandrin, and Alanna are called before Siuan Sanche, the Amyrlin Seat (Sophie Okonedo)—the leader of the Aes Sedai—to answer for their actions. The Amyrlin Seat believes that Logain deserved a fair trial and is thus furious at the three Aes Sedai who gentled him without her approval. Although they attempt to persuade her that they had no other choice, the Amyrlin Seat punishes Liandrin, who was in charge of the group. With women as cunning as the Aes Sedai, it is no surprise that the White Tower should be festering with schemes and secrets. The episode illustrates this primarily through the public humiliation of the sisters who gentled Logain. Although they are meant to present a united front to the world, it is clear that tensions run high.

While Liandrin’s allegiances were ambiguous, it now becomes evident that she is on less than friendly terms with Moiraine. After Moiraine refuses to tell the Amyrlin Seat where she has been for the past two years, Liandrin threatens to divulge what she knows of Moiraine’s plans. Thankfully, despite having been absent from the Tower for two years, Moiraine knows how to deal with such threats and silences Liandrin. But her troubles do not end here. On the one hand, she is bound to obey the Amyrlin Seat, and she cannot lie, but she also knows that it is primordial that her plans concerning the Dragon remain a secret. Political tensions are a significant part of Jordan’s books, but the true suspense emerges from the characters’ conflicting emotions—and the show portrays this perfectly.

After an incredibly tense face-off between Moiraine and Siuan, the latter declares that Moiraine must also be punished for her lack of obedience but delays her sentence until the next day. Up until this point, Moiraine and Siuan appear to have an extremely strained relationship, but that is only how they choose to appear to the other Aes Sedai. When they meet during the night to discuss the progress of their plans, it turns out that they have actually been working together for the last 20 years to find the Dragon Reborn.

Book fans will be surprised by how their relationship is portrayed on screen. In the books, the nature of their relationship is ambiguous, but that ambiguity is thankfully absent from the show. Moiraine and Siuan’s chemistry is palpable. Even when they don’t speak, there is incredible intimacy and understanding between them, effectively translating a relationship that unfolds over numerous books into a few minutes of screen time.

Their interactions also illustrate how deeply Moiraine has planned and the number of risks at hand. We don’t learn much more about the Dark One during their conversation—only that he is perhaps becoming stronger—nor do we learn more about the Dragon. What we do learn is that she is willing to do pretty much everything to see those goals fulfilled—even if it means risking the lives of the other protagonists.

Because of all these reasons, “The Flame of Tar Valon” could have been a perfect episode—but then the other plots come in. Our main protagonists are finally reunited, now joined by Loial, but how this happens left me feeling utterly confused. Moiraine asks them to meet her outside the city at a Waygate—a portal that grants access to the Ways, where one can travel great distances very quickly. In the books, Loial is the one who helps them access the Ways, but in the show, Moiraine opens the Waygate on her own. Here it seems like the show is back on track with the plot of the book, just with a long detour. However, the story now skips directly to bringing the protagonists to the Eye of the World, but Moiraine still doesn’t know who the Dragon is, so her plan seems highly defective.

Stranger still is what happens to Mat. In the second episode, Mat stole a dagger from the cursed abandoned city of Shadar Logoth. Naturally, the dagger was also cursed, and through Moiraine, we finally learn that this is the cause of his ailment and quickly heals him. On the surface, there’s nothing wrong with this scene, and the special effects are insanely amazing. However, in the books, Moiraine can only alleviate his suffering. Here she appears to heal him completely, and Mat’s attachment to the dagger leads to complications that significantly alter both his character and the plot of the original source.

Of course, these changes could turn out positively, but so far, they leave me slightly worried and perplexed. Overall, The Wheel of Time still manages to weave an engaging and compelling story, and I cannot wait to see where the last two episodes of the season take us.

What did you think of the sixth episode of The Wheel of Time? And keep your eyes open for weekly reviews of future episodes!